Wing Chun was created in China during the seventeenth century, and it was the last Kung Fu art ever developed in China. It was the only Kung Fu art ever created by a woman.Wing Chun is an in-close combative system based on not fighting “Force against Force,” using the principles of Yin/Yang. 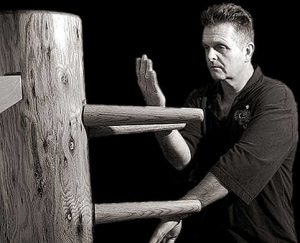 The system’s movements are based on looking at and implementing the movements of certain animals. Those animals are the white crane, snake, tiger and fox. However, its effectiveness and uniqueness is its ability to utilize “chi”, one’s internal energy.The Wing Chun approach results in a no-nonsense defense system characterized by simplicity, directness, speed and techniques rather than physical strength to respond to the attack. Thus, Wing Chun becomes especially useful when applied to a larger, stronger, faster, more aggressive adversary.In addition, Wing Chun was designed to capitalize on each individual’s body mechanics. Therefore, people with varying abilities can quickly become adept in defending themselves and at the same time developing self-confidence. It is well known that Yip Man taught many of his main students differently, unique to their association with him. Rather than separate these extremes, we integrate them in order to teach Wing Chun from its total perspective. The aim of Wing Chun Kung Fu is to develop physical,mental and spiritual awareness. These elements transcend you to a higher level of life. Self awareness, self respect and a duty to serve should be the goal of life in every martial artist. Meditate on these principles and make peace on your study of Kung Fu a way of life.

The Origin of Wing Chun
by Grandmaster Yip ManThe founder of the Wing Chun Kung Fu System, Miss Yim Wing Chun was a native of Canton [Kwangtung Province] in China. She was an intelligent and athletic young girl, upstanding and forthright. Her mother died soon after her betrothal to Leung Bok Chau, a salt merchant of Fukien. Her father, Yim Yee, was wrongfully accused of a crime and, rather than risk jail, they slipped away and finally settled down at the foot of Tai Leung Mountain near the border between Yunan and Szechuan provinces. There they earned a living by running a shop that sold bean curd.